Posted on September 6, 2012 by The Fatalist Marksman

The first thing one should understand about Binaryism is just how prevalent binary concepts are in the universe.  Most of the things we think of as having “opposites” have binary counterparts, and the “opposite” is often not an opposite at all, but rather the binary counterpart.  Hot and cold is a prime example.  We have a tendency to think of them as opposites, but heat is just thermal energy, and cold is merely the absence of that thermal energy.  It’s such a good example that even the theoretical complete absence of any heat whatsoever is called Absolute Zero.  We can only ever approach Absolute Zero, but never actually reach it, as particles must always, to some extent, be moving.  Zero is the limit of the function. 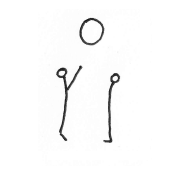 Such is the case with most of our Zeroes, as we shall see.

So hot is quantifiable, and cold is the absence of that quantity.  What other common, quantifiable concepts share this binary relationship?

Et cetera.  Pretty simple.  It can get trickier, however, when two concepts cannot be quantified, but may still be qualified as the 1 or 0 in a binary relationship.

You may have noticed that, up until just now, Binaryism seems to share much in common with the premises of Boolean Algebra.  It will continue to show strong similarities.  However, whereas Boolean Algebra designates 1 as “true” and 0 as “false” (as anyone who has made the most basic attempt at programming should know), Binaryism flips it around.

In Binaryism, 0 is always the ideal, the natural state, before corruption.  With theoretical states such as Truth and Beauty, it is the goal we strive toward but can never reach with 100% completion.  With real states such as male and female, in addition to the general shape of our primary sexual characteristics, it is also true that a fertilized creature-in-development’s default state is female, and it is not unless androgens are introduced that it will develop into a male.  Likewise, this will not occur unless the Y chromosome is paired to the X.  As with Boolean Algebraic disjunctions, 0∨0 (or XX) = 0 (female), and 0∨1 (or XY) = 1 (male).  1 is the corruptor…

…but it is also the creator, as we shall see.

This entry was posted in Uncategorized. Bookmark the permalink.

4 Responses to Counterparting the Proverbial Sea